It isn't true that Feng Shui is practised differently in the southern hemisphere because the ancient Chinese Feng Shui classics were written by masters living in the northern hemisphere. The same principles of Feng Shui are universally applied. Differences in local climate and season do not change these principles. It is not true that all houses should face South to enjoy good Feng Shui!

In other words yin and yang are relative to whatever you are comparing it to.

And so your house has yin and yang areas too. Your bedroom is a yin place where you sleep compared to your living room where you entertain your guests.

Form School - the Four Celestial Animals
A house, just like a good chair, should have a good support behind it. The support can come in the form of a real mountain. If there is no real mountain the support can come in the form of a virtual mountain, such as a wall or another house. This support is known as the Black Turtle in Feng Shui. There should be similar protection on the left of the house called the Green Dragon and to the right of the house, called the White Tiger. It is said that it is better for the Green Dragon to be taller than the White Tiger. In front of your house, there should be an open space. The name of this space is given a name of a mythical bird, called the Red Phoenix. This is an area where "Qi" (energy) gathers and makes its way into your house.

Forms are the trees, roads, rivers and other structures found in the surroundings of your home. Forms can produce good feng shui (Sheng Qi) or bad feng shui (Sha Qi).

Form School is a very important branch of feng shui, but it should form part of a much bigger picture. In more advanced studies you learn that sometimes a house can have all four celestial animals in their correct positions but the space inside the house is not necessarily good to live in. 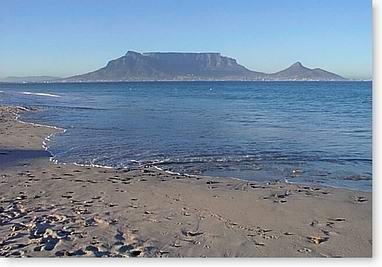 TABLE MOUNTAIN in Cape Town, South Africa is not known as "Mother Earth" for nothing. This mountain is of earth element because of its shape. The sea at its feet is yang compared to the mountain which is yin.

5 Elements - Wu Xing
The ancient Chinese gave names to the different kinds of energies or Qi at work in our environment. According to their characteristics, shape and colour these 5 elements or energies were identified as Water, Wood, Fire, Earth and Metal. These energies interact with each other and we should not see them as literal objects. As they interact they are either being enhanced, weakened, or controlled by each other. These cycles and interactions are ever-present and ever-changing. When we use a microwave oven we see the result of the food being cooked or heated even though we can't see the microwaves. This is how it is in feng shui. The qi might not be seen but the results tell us that it most certainly exists. These energies are also assigned compass directions.

Eight House - The Eight Wandering Stars
In this branch of feng shui there are eight types of houses. You need a reliable compass to know what kind of house you have. You can tell from the way your home sits, which kind of house you have. According to the compass direction, we know what the qi is in various parts of the house. Some areas will be fortunate and some will be unfortunate. You need a floorplan drawn to scale to see which areas of your house have what energies.

The Eight House theory is limited because according to this school it doesn't matter how long you stay in a house, the qi remains the same. As we know, nothing stays the same. We can have two homes facing or sitting in the same direction yet the occupants may experience very different luck. How can that be explained? There is an essential ingredient missing here and it is called Time. Over time, everything changes. You cannot assess the qi in a space or location without assessing how that qi will affect the individual over time.

The Eight House Theory also divides people into two groups called the West Group and East Group. According to your year of birth you can find out which group you belong to as well as your Ming Gua number. There are 8 Ming Gua numbers. From this number you can find out which directions are favourable for you to sleep in, work in, eat in and study in. It also tells you what directions are unfavourable for you. This information is useful.

Xuan Kong - (Flying Star)
You need a good foundation in the basics of feng shui in order to learn and practice Xuan Kong or Flying Star. This is the most advanced branch of feng shui and where the missing ingredient of time is added.

You need to know in which year your house was built. An accurate compass degree reading of the facing of your house is essential. You need a floorplan drawn to scale. You need to find the centre of your house and divide it into eight compass directions. You must study the forms (landscape) outside your home and the forms inside your home. According to the compass degree reading and birth date of your house you are able to draw up a Xuan Kong chart. From this chart, feng shui practitioners can tell many things and together with the forms inside and outside your house, they can determine whether the occupants of the house enjoy good feng shui or not. The house enjoying good feng shui today may not have good feng shui in two years time. This is because the cycles of qi are changing - they never stay the same. The job of a feng shui practitioner is to encourage the good qi to be retained and flow through a house and to stop the bad qi from harming the occupants.